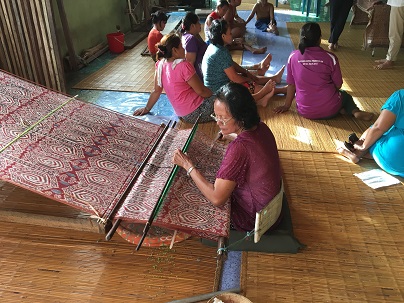 Working conditions in Southeast Asian countries are difficult. Many practices place workers in situations of dependency on their employers, creating conditions of potential servitude. But some populations are working to address these difficulties, supported by external actors. This is the case of the project launched in 2013 in the heart of the Rumah Gare community (belonging to the Iban ethnic group), by anthropologist Welyne Jeffrey Jehom of the University of Malaysia and highlighted in a documentary made in 2016 by RHSF. The aim of this initiative is to help community members develop an economy around an ancient textile tradition.

A project to support the Iban community

Launched under the registered trademark “Rh. Gareh”, this project ensures the production of the “pua kumbu” (ceremonial blanket), the traditional textile of the Iban people. The objective is to support women and men by offering them a fair production structure. This initiative was set up thanks to the capital provided by community members and anthropologist Welyne Jeffrey Jehom to buy the tools needed to create these products and ensure their distribution. The role of Welyne Jeffrey Jehom, moreover, has been crucial in the development of production and the positioning of the products according to commercial demands. The community is composed of 35 female weavers (mostly mothers, widows or divorced) and one male weaver. They work independently and are free in the exercise of this function. Decisions about the activity are taken by mutual agreement by the community and 100% of the income acquired from a sale is systematically given to these workers (thanks to the registered trademark).

Financially independent, they now understand the value of their work. With the money collected they can send their children to school, renovate their houses… An online sales platform has also been created by Welyne Jeffrey Jehom which allows them to reach the consumer directly, without intermediaries or additional costs. Each product put on sale is unique: the buyer can find the name of the weaver or weaver, the history of the design, information on the colouring used…

Welyne Jeffrey Jehom has also developed with the community a range of products including bags, clothes, shoes… Since its creation, the project has gained strong support from the tribe members. In two years, their number has increased from 7 to 35. Young apprentices (a 29-year-old man and a 15-year-old girl) have joined the team to learn skills from the more experienced.

The pua kumbu: a unique and ancestral know-how

Each piece is unique, it is manufactured between one and a half and two months and requires meticulous work. All the ingredients used are of natural origin. The dyes are made from plants and the water used comes from the mountains. From the beginning of the project, the first task of the anthropologist was to collect the patterns from each family through the stories of Iban folklore. 75 patterns that had not been woven for 30 to 40 years were discovered.

RHSF’s film on the work of the Rumah Station community

This NGO is the only organisation in France to have been selected as part of the European SUSY (Sustainable and Solidarity economy) project, which aims to combat poverty through the Social and Solidarity Economy. This project is an opportunity for RHSF to recall that the shorter the chain of subcontracting, the less the risks of forced labor and child labor exist. Thus, the NGO looked into the work of Welyne Jeffrey Jehom in the heart of the Iban ethnic group and made this documentary with Charles Gay, a New York director.

Welyne Jeffrey Jehom’s initiative was welcomed by the Malaysian government. An exhibition of pua kumbu was also held at the University of Malaysia in the summer of 2015 and was well received by many visitors. This project is supported by the Tun Jugah Foundation which promotes traditional Iban weaving methods.

Interview with Adèle Rivet, Project Manager at Ressources Humaines Sans Frontières, who worked on this project in Malaysia.

Why did you choose this project in the framework of good practices in Malaysia?
We chose this project because it combines the fight against discrimination and brings together the criteria of the Social and Solidarity Economy. Indeed, at the economic level, it allows the Rumah Station community to have a fair income through the sale of pua kumbu and decisions are taken together. At the environmental level, the products used come essentially from the forest and are cultivated by the community itself, which is in no way harmful to the environment. Moreover, the project has seen the number of weavers increase from 7 to 35 in only 2 years. Finally, the trademark is an excellent initiative against the exploitation and theft of their know-how.

How did you hear about this project?
RHSF met with a French company in Malaysia which has set up a company crèche to fight against discrimination against women and forced labor. This company employs 80% women (local workforce). The meeting was attended by Tenaganita (a Malaysian NGO with which RHSF has been working for many years on the issue of forced labor) and an anthropologist from the University of Malaya, Dr Welyne Jeffrey Jehom. She specialises in gender studies and her work aims to fight against discrimination, particularly among women. She told us about her Social and Solidarity Economy project with the Rumah Gare community, which seemed to us to be a very interesting initiative to fight against forced labor and human rights abuses in general.

How was the trip within this tribe?
The trip went very well. An incredible and unforgettable experience. We were very well received thanks to Welyne who is completely integrated into the community. The journey to get there is long because we took an internal flight to Sibu (Borneo) then several boats and finally we finished our trip on a motorized pirogue in the middle of nowhere where nature is still preserved. We stayed 2 nights for the filming. We stayed at the longhouse where the whole community lives. We shared meals with the master weaver, her granddaughter and her daughter. We also all slept (Welyne, master weaver, granddaughter, Charles and myself) in the same room. On the first evening, we were able to watch some Iban dances with Iban music and sip rice wine prepared by the community.

Did they present their work to you?
Yes, we were able to see different processes including the harvesting of plants for dyeing and the whole preparation stage to obtain the colour, weaving etc… The collective gallery of the longhouse is always very lively, the weavers work at their own rhythm but from waking up to going to bed there was always someone weaving.

Who directed this documentary for RHSF ?

This is a New York director, Charles Gay, with whom we had already worked in our drawing competition on forced labor with Plantu. Charles Gay has made many documentaries, particularly in Kenya, about female circumcision. And the music was offered to us by Envelope Music (New York).

What will it be used for?
This documentary will be used in the framework of the European project SUSY in order to highlight these good practices (positive environmental, social and community impacts) during workshops and meetings. It will be screened during a speaker tour in 4 regions in France (Midi-Pyrénées, Languedoc Roussillon, Aquitaine and Île-de-France) during which we will welcome Malaysian speakers. We also intend to present it in the framework of a competition, the call will be launched in March. 5-6 films presenting good practices will be selected to be screened during the Terra Di Tutti festival in October.