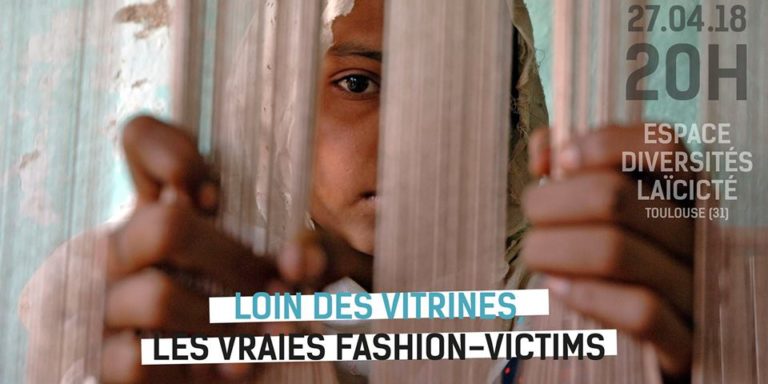 In the era of fast-fashion (disposable fashion) and overflowing wardrobes : who are the real fashion-victims?

On April 24, 2013, globalization suddenly put a face on Bangladeshi women workers. On that day, more than 1000 people perished in the collapse of a building, the Rana Plaza, which housed textile workshops in Dhaka, the capital of Bangladesh.

Five years later, have the working conditions of those who make our clothes improved? How can we, as consumers, contribute to a more positive and ethical fashion?

See you on April 27th at 8pm at the Espace Diversité Laïcité for a film-debate around a short film from Franck Grignon’s documentary “Les damnées du low cost”! Admission is free, but registration is mandatory (here).

Event organized by Human Rights Without Borders and the Collectif Ethique sur l’Etiquette de Toulouse, as part of the Fashion Revolution Week. Debate animated by RHSF, the Ethical Collective on Etiquette – Toulouse, Artisans Du Monde Toulouse, and the brand Bhallot.

SYNOPSIS – “Les damnés du low-cost” (Franck Vrignon)
On April 24, 2013, images of the collapse of a textile factory in Bangladesh went around the world. The Rana Plaza was home to hundreds of women workers, small hands working for the needs of the low-cost sector. After the tragedy, and the corpses that emerged from the rubble for all to see, the world was brutally made aware of what was happening thousands of miles away in Bangladesh’s garment factories. These workers have become the symbol of the excesses of globalization. Several French companies took part in the resistance in Europe, led by NGOs and members of parliament.

FRAMEWORK OF THE EVENT